All about Solar Batteries

Batteries are basically the only method to store direct current (DC) power produced from sources like solar panels, wind generators, micro-hydro or generators.  Think of your batteries like a bucket of energy, where the voltage is equal to pressure, and amperage equates to flow rate. Imagine that we are slowly pouring water into a bucket that has a small hole on the bottom. As we pour the water into the bucket, its slow leak will mean that you’ll probably use 12 gallons of water to fill a 10 gallon bucket by the time it is full.  In the same way, it takes more energy to charge a battery than it will actually store.

The size of your bucket is analogous to the amp hour capacity of the battery bank. All deep cycle batteries are classified and rated in amp-hours.  Amp-hours is the term used to describe a standardized rate of discharge measuring current relative to time.  It is calculated by multiplying amps and hours.  The generally accepted rating time period for most manufacturers is 20 hours.  Twenty hours has been the standard time length for rating batteries, although shorter or longer time variables may be used depending on the application. This means that the battery will provide the rated amperage for about 20 hours until it is down to 10.5 volts or completely dead.  Some battery manufacturers will use 100 hours as the standard to make them look better, yet it can be useful in long-term backup calculations. 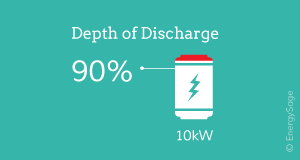 Most solar batteries need to retain some charge at all times due to their chemical composition. If you use 100 percent of a battery’s charge, its useful life will be significantly shortened.

The depth of discharge (DoD) of a battery refers to the amount of a battery’s capacity that has been used. In other words, DoD is how low you let the voltage drop before the next charge cycle or, in our bucket example, where the hole is vertically located on the bucket. Most battery ratings talk about 50% or so, but they will last longer if you keep them as charged as possible. Lead acid batteries will last much longer if you do not discharge them too deeply. This is known as shallow cycling and greatly extends their life.

Most manufacturers will specify a maximum DoD for optimal performance. For example, if a 10 kWh battery has a DoD of 90 percent, you shouldn’t use more than 9 kWh of the battery before recharging it. Generally speaking, a higher DoD means you will be able to utilize more of your battery’s capacity. 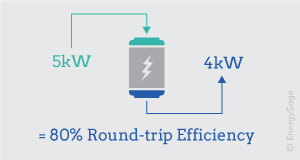 Most of the loss incurred in charging and discharging batteries is due to internal resistance, which is eventually wasted as heat.  Efficiency ratios are relatively high considering that most lead acid batteries are 85 to 95 percent efficient at storing the energy they receive.  Deep cycle batteries used in renewable energy applications are designed to provide many years of reliable performance with proper care and maintenance.  Proper maintenance and usage play a major role in battery lifespan. The most common causes of premature battery failure include loss of electrolyte due to heat or overcharging, undercharging, excessive vibration, freezing or extremely high temperatures, and using tap water among other factors.